Nick and I took Olivia (17 days old today!) to her 2 week follow-up appointment at the base pediatric clinic. Everything went fairly smoothly. She was kind of squirmy and didn't like being completely undressed on the table for measuring her weight and height. Somehow hospital clinics are always freezing! She is 8 lbs 4 oz, more than surpassed her birth weight of 7 obs 10.7 oz so she's doing great. Apparently it takes up to 2 weeks just for newborns to gain back to their birth weight so we're really pleased with her progress. She is 20.25 inches, up from her birth height of 19.25 inches. As far as percentiles goes, she's 50% for weight, 77% for head circumference (to hold all her smarts in) and 17% for height. Nick says she's short like me - oh well. But since she's so small all of this can change at anytime. I'm just trying to make sure she's nursing well and gaining weight.

Since her umbilical cord has fallen off, we have also started to cloth-diaper her. We originally wanted to use the G diapers, but they were way too big. So I tried the Fuzzibunz one-size, but they were too bulky. So now we have a system of using the Fuzzibunz X-small until she grows into the G diapers a bit. So far they're working out great, except we did learn that we have to double-stuff the diapers since she's a heavy wetter. Because of their softness, the cloth diapers have actually helped heal her little booty. The disposables were really making her little bottom red, even with applying Aquaphor or baby powder at every diaper change, so I'm really happy about that.

We're fairly lucky that our little girl is a pretty good sleeper overall. Don't get me wrong, there are still moments where we cannot figure out why she cries (and the girl has a set of pipes on her!). But generally she sleeps fairly well, and I have to periodically wake her up during the night to feed her. She has been known to sleep four or five hours straight! But I've read that it's more important that they eat about every 3 hours, so as hard as it is I periodically have to wake her up to get her to eat.

As far as other news is concerned, Nick has to go back to work this coming Friday :-( but I suppose that has to happen sometime. I have until 11 Sept but I will take a few more weeks off to be home with Olivia - it's going to be so hard to leave her, at least I'll know she'll be in good hands (with our friend Bekah!)

We are still wrestling with the insurance company and local contractors to get our roof, skylight, and gutters replaced after May's hail and wind storm. With a huge deductible it's tough, but we want to make sure everything's done right. Hopefully we can get everything done before it gets cold and snowy again this winter.

The weather has finally gotten a little cooler and we're very glad for it. My garden is suffering again this year - I simply don't have a lot of time to devote to it. The first year we were in Ohio we were too late in starting a garden (2009). The next year I was in grad school and Nick was deployed (2010). This year we have a baby...maybe next year I'll have a superb garden, although that may be wishful thinking. BUT...I'm still getting yummy tomatoes, peppers and zucchini so I guess I can't complain too much.

Nick and I went a bit crazy at Michael's and Kohl's a few days ago buying props to take more baby photos. I must say, Nick's getting better and better being an amature photographer! I will leave you with more samples of his work. As for me, I'll take limited credit with helping to set up and with some design as Nick's the brains behind all of our beautiful photos! 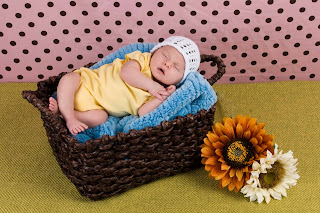 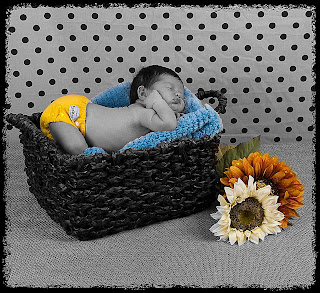 Posted by veronicasitao at 7:21 PM